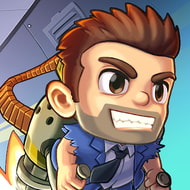 Halfbrick Studios
Games, Arcade
Android 4.4 +
Version: 1.43.1
$0
Jetpack Joyride (MOD, Unlimited Coins) - this game will allow you to feel like a real hero, because as developers tell us at the beginning of the game, our main character was very frustrated with their situation and works on paper. And so dawned on you, you have seen how scientists have invented a backpack. Since then the game Jetpack Joyride mod apk begins. You have to use not only pack to fight with opponents, but also a mechanical robot costumes. During the game you will also collect coins for which you can buy improvements. Be a hero, help scientists to make their invention even better.
Additional Information from Google Play:
Updated April 15, 2021
Size 152.9Mb
Installs 100 000 000+
Rated for 7+ years

Run the game and play only without the Internet!