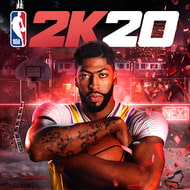 2K, Inc
Games, Sport
Android 4.3 +
Version: 97.0.2
$0
NBA 2K20 (MOD, Unlimited Money) - a basketball simulator that won the recognition of players on gaming platforms such as Xbox One and PS4 and the creators of the franchise released a companion app for mobile devices, the project was called MyNBA2K20, while in addition to the usual functions and features typical for add-ons, the developers decided to add a number of interesting features. So you get the opportunity to take your picture for the gallery, in real time to receive information about events and tournaments taking place in the K2 universe. But the most important thing in this program is you can earn a lot of bonuses and improvements, as well as unique player cards, as well as take part in card battles.
Additional Information from Google Play:
Updated 08.05.2020
Size 15.3Mb + 3017.3Mb
Installs 100 000+
Rated for 3+ years

You can spend money in MyCAREER, even when there is no amount