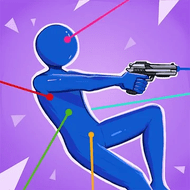 Kwalee Ltd
Games, Puzzle
Android 4.4 +
Version: 1.2.2
$0
Shootout 3D (MOD, Unlimited Gems) - an exciting puzzle game with action elements made in a minimalist style, and the gameplay combines elements of logic, physics and arcade. And so, at each level you have to move groups of people, both good and bad, you need to select the optimal shooting paths in such a way as to destroy the enemies and not hurt the representatives of your team. As you progress through the difficulty levels will increase, various objects and a larger number of groups will require you to more detailed analysis and accurate movement. The final levels at which you have to fight with the bosses, fights with which will require a completely different approach.
Additional Information from Google Play:
Updated April 30, 2020
Size 43.1Mb
Installs 10 000 000+
Rated for 7+ years