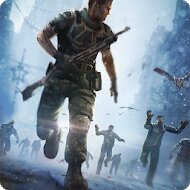 VNG GAME STUDIOS
Games, Action
Android 5.0 +
Version: 4.57.2
$0
DEAD TARGET: Zombie (MOD, Unlimited Money) - nice 3D first-person shooter, the plot of which takes place in 2040, the planet is exhausted by war and nuclear weapons. Humanity is fighting for resources balances, but at the very end of the war, biological weapons have been used, which infect all living things in its path, leaving the crowds behind infected mutants. You miraculously survived and are trying to survive in this harsh world DEAD TARGET Zombie mod apk, using the most advanced weapons, and smite the enemies of the crowd on his way to buy or improve your gear that would always be stronger than his opponent.
Additional Information from Google Play:
Updated April 12, 2021
Size 152.4Mb
Installs 100 000 000+
Rated for 16+ years