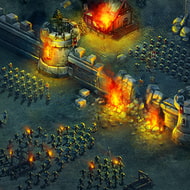 NEXTERS
Games, Strategy
Android 4.1 +
Version: 5.21.1
$0
Throne Rush - fantasy online multiplayer game that combines elements of real-time strategy, in general, the gameplay is performed in the usual style of the genre, unite in clans, collect resources, equip your kingdom, defend yourself or raids in the lands of neighbors. However, the developers realized several interesting features such as a huge game world, a wide selection of unique characters, an epic company and thematic daily missions and tasks, as well as a full-fledged battle arena, so we can safely say that this game will be a great addition to the collection for all fans of the genre.
Additional Information from Google Play:
Updated July 27, 2020
Size 104.2Mb
Installs 10 000 000+
Rated for 7+ years