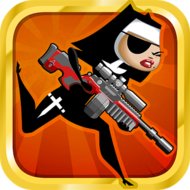 Frima Studio Inc.
Games, Action
Android 2.3.3 +
Version: 1.6.2
$0
Nun Attack: Run & Gun (MOD, unlimited coins) - New android game in the series about the adventures of a not quite ordinary fighters against evil spirits. Our main character, though entirely given to the service of God, but at the right time always ready to pick up a gun and defend their proud name of the fight against unclean. And in the last Nun Attack: Run & Gun missing a head demons, vampires, zombies, and even Satan himself! Pass all the seven circles of Hell, destroy opponents rozstrelivaya them with machine, carry dizzying jumps over a precipice and try to save this vicious and sinful world.
Additional Information from Google Play:
Updated 02.08.2016
Size 32.3Mb
Installs 5 000 000–10 000 000
Rated for 3+ years