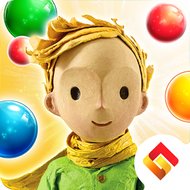 Genera Games
Games, Puzzle
Android 4.0.3 +
Version: 2.0.12
$0
The Little Prince - Bubble Pop (MOD, Coins/Lives) - Out of the new animated film based on the cult works of Antoine de Saint-Exupéry did not go unnoticed, not only fans of the book about a little prince, but the developers of games for Android tablets, which immediately released their own version of events - The Little Prince - Bubble Pop. In it you can find all the familiar and favorite cartoon characters for you, and to play with them!
Additional Information from Google Play:
Updated 02.23.2016
Size 68.1Mb
Installs 10 000–50 000
Rated for 3+ years