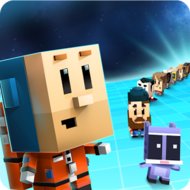 Play365
Games, Arcade
Android 2.3 +
Version: 1.0.2
$0
Snake Legends (MOD, Unlimited Cash) - developers went through the usual for them, based on the popular game of the past, this time it became a snake, arcade polarity that can be compared with Arkanoydom and Tetris. However Play365 decided to give a retro arcade game a whole new look by implementing cubic graphics and adding a system of achievements and development. Besides the snake itself will consist of separate disparate characters.
Additional Information from Google Play:
Updated 03.25.2016
Size 18.7Mb
Installs 500 000–1 000 000
Rated for 3+ years