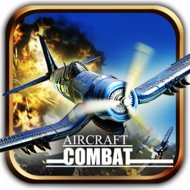 BraveTale
Games, Arcade
Android 2.3 +
Version: 1.0.8
$0
Aircraft Combat 1942 (MOD, unlimited coins) - A game where you have to sit at the helm of the aircraft during the Second World War, taking part in air battles, your task on past the fact that to bring down the maximum number of enemy equipment, perform a variety of missions and tasks. A wide range of aircraft, with the possibility of improvement and development, various weapons, which in spite of the arcade-style game you have to use wisely choosing the best tactics under certain situations, it is worth noting the excellent graphics and animation.
Additional Information from Google Play:
Updated 06.24.2016
Size 46.4Mb
Installs 5 000 000–10 000 000
Rated for 3+ years