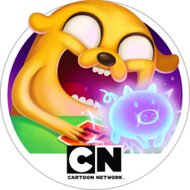 Cartoon Network
Games, Adventure
Android 4.0.3 +
Version: 1.0.10
$0
Card Wars Kingdom (MOD, unlimited money) - Over-popular card game in which you will fight with a large number of opponents and real players from around the world. This game is created based on the animated series of the same name, which scored a large number of fans. Choose your character and in a place with Finn and Jake fight against the forces of evil. Collect your unique and invincible squad, in which there will be a princess Gum, a fiery lady and many other characters. Collect the strongest and unbeaten, to defeat your opponent.
Additional Information from Google Play:
Updated 01.20.2017
Size 27.3Mb + 282Mb
Installs 1 000 000–5 000 000
Rated for 3+ years