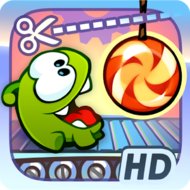 ZeptoLab
Games, Logical
Android 2.1 +
Version: 2.5
$0
Cut the Rope HD (MOD, Unlimited Boosters) - game created and released in the light of Russian company Zeptolab. Cut the Rope does not need a special introduction, as a game, a little inferior to its popularity on the famous Angry Birds. Especially for tens of millions of fans of the game Cut the Rope, the version released in the application for Android.
Additional Information from Google Play:
Updated 10.03.2016
Size 51.1Mb
Installs 50 000–100 000
Rated for 3+ years