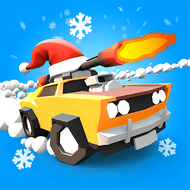 Not Doppler
Games, Race
Android 4.4 +
Version: 1.4.31
$0
Crash of Cars (MOD, Coins/Gems) - a mixture of arcade races and multiplayer games together. At the beginning of the game you will have the chance to choose your first car, which will hunt for the other players and go from persecution. A large number of locations in which you will collect gold crown, preying on other players, smashing their cars and taking away what they could collect. Despite its low weight, the game received a beautiful 3D graphics and excellent management. Become the best racer in the Crash of Cars mod apk.
Additional Information from Google Play:
Updated December 18, 2020
Size 114.2Mb
Installs 10 000 000+
Rated for 3+ years