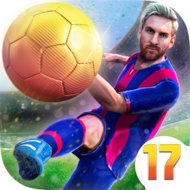 Genera Games
Games, Sport
Android 4.1 +
Version: 0.3.7
$0
Soccer Star 2017 Top Leagues (MOD, Unlimited Gems) - An exciting game that sees you the real stories of real football players who have become world-class stars. The game became popular not at the expense of its sports genre but for the story itself, in which you will see a lot of different interesting scenes with your favorite champions. Learn how they became world leaders and what prompted them to do so.
Additional Information from Google Play:
Updated 04.19.2017
Size 84.9Mb
Installs 100 000–500 000
Rated for 3+ years