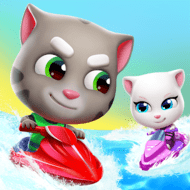 Outfit7 Limited
Games, Casual
Android 4.4 +
Version: 1.5.3.497
$0
Talking Tom Jetski 2 (MOD, Unlimited Coins) - the continuation of a series of arcade games, the main character of which became the popular character of the cat Tom. We have already spent a lot of time in the company of Tom and his friends, this time we have to go along with other heroes of the series to go on a sea voyage on water motorcycles, in other words, we have a racing arcade with elements of a runner, however this is not all, for points earned you can build a cozy beach house, and then in the best traditions of the series to improve housing and care for the heroes.
Additional Information from Google Play:
Updated February 26, 2021
Size 79.4Mb
Installs 50 000 000+
Rated for 3+ years