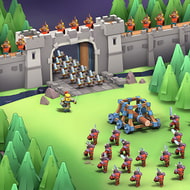 Play365
Games, Strategy
Android 4.1 +
Version: 1.4.5
$0
Game of Warriors (MOD, Unlimited Coins) - tactical strategy of a series of defense towers, the events of which are developing in some fairy kingdom, which is under the yoke of evil forces, who dream of enslaving humanity. The gameplay combines elements of tactical strategy and action from the wall-to-wall series. You have to defend the walls of the castle, while using an impressive selection of defensive structures and various units. Graphically, the game is made in the style of fantasy stories.
Additional Information from Google Play:
Updated June 10, 2020
Size 58.2Mb
Installs 10 000 000+
Rated for 3+ years