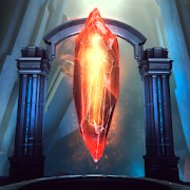 Fantastic, yes
Games, Puzzle
Android 4.4 +
Version: 1.0
$0
Returner 77 - a fascinating three-dimensional puzzle according to the story of which you come to consciousness on a spaceship that is docked to a large alien shuttle and now your task is to explore the ship to try to solve all the mysteries, while studying non-terrestrial technologies to try not only to survive, but to get to your native planet. Separately worth noting smart graphics, a mesmerizing soundtrack, adventure story and hours of gameplay.
Additional Information from Google Play:
Updated 06.27.2018
Size 50.2Mb + 800Mb
Installs 10 000–50 000
Rated for 3+ years