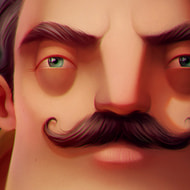 tinyBuild
Games, Adventure
Android 7.0 +
Version: 1.0
$0
Hello Neighbor (MOD, Unlocked) - the original multiplatform game made in the genre Survival Horror. According to the idea of ​​the developers, the player must by all possible means get into the neighbor's house and try to collect information and solve some "terrible secret". It would seem nothing new, but it's only at first glance, the creators of the game Hello Neighbor mod apk managed to implement a fairly "cunning" and "far-sighted" model of artificial intelligence that your opponent is endowed with, so that with each new attempt to get into the house you will be trapped in the path of your journey in past times, as well as restored doors, locks, windows and stuff.
Additional Information from Google Play:
Updated April 13, 2021
Size 48.1Mb + 1050.1Mb
Installs 10 000 000+
Rated for 12+ years