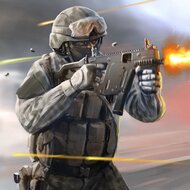 Blayze Games, L.L.C.
Games, Action
Android 4.2 +
Version: 1.59
$0
Bullet Force (MOD, Enemy on Minimap) - multiplayer first-person shooter which in many respects borrowed elements of the desktop hit Counter-Strike. In turn, the Android version will allow you to participate in dynamic battles in the format 10 to 10, while using a rich selection of weapons, armor, camouflage and various equipment. At the moment, Bullet Force has four game modes. Graphic part and control also do not cause censures. Separately it is worth noting the possibility of an offline game, without the Internet, against bots.
Additional Information from Google Play:
Updated 05.26.2019
Size 75.4Mb + 437Mb
Installs 10 000 000–50 000 000
Rated for 12+ years