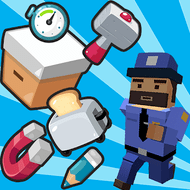 iGene
Games, Arcade
Android 4.4 +
Version: 29.0.3
$0
Hide.io (MOD, Unlimited Coins) - a series of games with the general name .io is well known to fans of online shooters, while the breadth of various directions is simply amazing, we already had to fight both in the world of atoms and molecules, and using heavy armored vehicles. The creators of the new game called Hide.io generally used the basic elements of the series, but at the same time decided to move away from the combat subjects and gave us the opportunity to recall childhood and play hide and seek, but in the digital world. Yes, your task in a dozen different locations to hide in the most intricate places or to amaze everyone with their observability while searching for opponents. A full-fledged multiplayer will allow you to play with real players from all over the world.
Additional Information from Google Play:
Updated November 14, 2020
Size 77.8Mb
Installs 10 000 000+
Rated for 3+ years