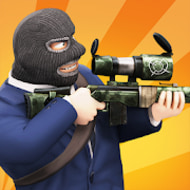 PlayStack
Games, Action
Android 4.4 +
Version: 2.13.39811
$0
Snipers vs Thieves (MOD, Marker/Ammo) - dynamic action shooter in which you have to go to a mysterious and dangerous world populated by dinosaurs and zombies, while trying to destroy from a variety of weapons as many enemies as possible. The plot of the game was based on a controversial program on the idea that scientists combined the DNA of people and dinosaurs, but how to conduct the experiment was unsuccessful and the streets burst huge bloodthirsty monsters. It is in this world that you will have to try to survive. Excellent graphics and various visual effects significantly diversify the gameplay.
Additional Information from Google Play:
Updated July 30, 2020
Size 29.0Mb + 183.1Mb
Installs 10 000 000+
Rated for 7+ years