Download Once Upon a Tower (MOD, Unlocked) free on android 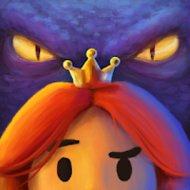 Pomelo Games
Games, Action
Android 4.1 +
Version: 9
$0
Once Upon a Tower (MOD, Unlocked) - vertical action with elements of the platformer and puzzle. The plot of the game is built around a fairytale story, the princess is imprisoned in a high tower and waits for her to be rescued by a knight in shining armor, in whose role you will perform. Each level is a vertical location consisting of intricate blocks of blocks, on which there are also various enemies guarding the peace of the princess, you also need to get to the girl and release her.
Additional Information from Google Play:
Updated 08.16.2018
Size 48.8Mb
Installs 1 000 000–5 000 000
Rated for 3+ years