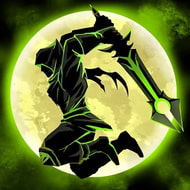 Bravestars Games
Games, Action
Android 4.1 +
Version: 1.92.1.0
$0
Shadow of Death: Dark Knight (MOD, Unlimited Money) - an unusual combination of role-playing and horizontal fighting, while this mix will allow you to enjoy all the characteristic features of these areas. The developers have not forgotten about the storyline, the events of the game unfold in a kind of fantasy world, a world in which for several millennia the opposition of the rulers lasts, and in the center of the struggle are magic, alchemy, astrology and other elements characteristic of this genre. Stylized graphics Shadow of Death mod apk, a huge selection of characters, the pumping system will give the gameplay unusual and tighten you for long hours.
Additional Information from Google Play:
Updated October 21, 2020
Size 153.0Mb
Installs 10 000 000+
Rated for 7+ years