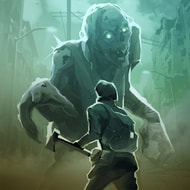 GreenPixel Ltd
Games, Action
Android 4.1 +
Version: 1.128
$0
Prey Day: Survival - Craft & Zombie (MOD, Immortality) - the zombie action story of which unfolds in a certain city in which there was an outbreak of an epidemic, the virus of which turned people into the walking dead and now few survivors are forced to fight for their existence. In turn, the protagonist wakes up in the hospital, surrounded by mountains of corpses and blood. The only chance to stay alive is to unite with the survivors and gain a foothold in one of the houses, while making forays for provisions and resources for crafting. Game mechanics is a kind of mix between role-playing and strategy, and survival elements are diluted with adventure inserts. Graphically, the game is also made above all praise.
Additional Information from Google Play:
Updated 08.06.2020
Size 68.4Mb + 253.6Mb
Installs 1 000 000+
Rated for 12+ years