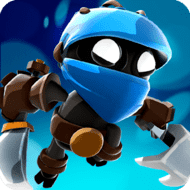 Frogmind
Games, Strategy
Android 4.1 +
Version: 2.4.3.2
$0
Badland Brawl - a series of hardcore platform games that has been in demand and popular for several years, not only on mobile platforms, but also on PCs. As a result, the creators of the project decided to use the characters and the main ideas of the project to release games and other directions, so before us is a new online shooter called Badland Brawl which is based on the achievements of that same platformer. Badland Brawl is distinguished by original gameplay based on physical processes, production of original game chains, excellent graphics and the ability to play with friends.
Additional Information from Google Play:
Updated April 17, 2020
Size 128.0Mb
Installs 1 000 000–5 000 000
Rated for 7+ years