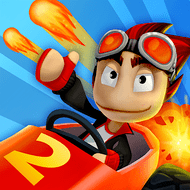 Vector Unit
Games, Race
Android 4.4 +
Version: 1.7.0
$0
Beach Buggy Racing 2 (MOD, Unlimited Money) - the second part of the popular racing arcade in which you once again have to sit behind the wheel of a racing buggy and try to win leading positions in both the single company and in competitions against real players from around the world. In general, the sequel has retained the basic elements of the first part, which are so loved by the players. At the same time, the Beach Buggy Racing 2 mod apk received more modern graphics, a new development system, an updated fleet of vehicles and, of course, new tracks located in different parts of the world.
Additional Information from Google Play:
Updated December 21, 2020
Size 138.9Mb
Installs 10 000 000+
Rated for 3+ years