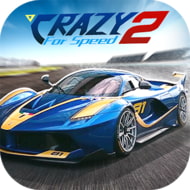 MAGIC SEVEN
Games, Race
Android 2.3 +
Version: 3.5.5016
$0
Crazy for Speed 2 (MOD, Unlimited Money) - continuation of the popular arcade races that have won enviable popularity among fans of the genre thanks to a wide choice of cars, excellent graphics and many well-developed locations. And here we have a full-fledged sequel that retained all the main elements of the first part, while the developers decided to turn their attention to cars from the supercar series, so now you will have the opportunity to race through difficult tracks on the best sports cars. And realistic physics and detailed graphics perfectly convey the overall atmosphere of the game, as well as the dynamics and drive.
Additional Information from Google Play:
Updated 07.02.2020
Size 69.7Mb
Installs 10 000 000+
Rated for 3+ years