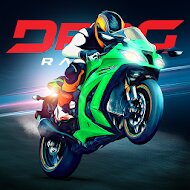 Creative Mobile
Games, Race
Android 3.0 +
Version: 2.0.3
$0
Drag Racing: Bike Edition (MOD, Unlimited Money) - the domestic studio that released such a popular series as Drag Racing and here we have a new part of the series called Drag Racing: Bike Edition in which you have to compete in classic quarter-mile races, but this time on motorcycles. In general, the gameplay is made according to the usual scheme, your task is to get to the finish line first, and with the money earned and experience points, develop an existing technique or buy a new one. Separately, it is worth noting the presence of a full-fledged multiplayer mode, excellent graphics and realistic physics.
Additional Information from Google Play:
Updated 05.02.2019
Size 20.5Mb
Installs 10 000 000–50 000 000
Rated for 3+ years