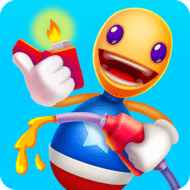 Playgendary
Games, Action
Android 5.0 +
Version: 1.4.1
$0
Kick the Buddy: Forever (MOD, Unlimited Money) - a fun arcade game in which you needed to throw various sharp objects at a certain character named Buddy. And here we have a sequel which got the name Kick the Buddy: Forever, this time the developers noticeably diversified your capabilities and now you can try on your friend a huge number of different types of weapons and objects, ranging from cold weapons to atomic bombs. The graphic part has retained the original style, but the physical model has been significantly improved. In addition, you have the opportunity to customize Buddy.
Additional Information from Google Play:
Updated 07.23.2019
Size 107.0Mb
Installs 10 000–50 000
Rated for 3+ years