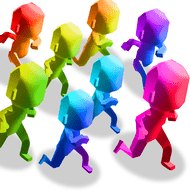 VOODOO
Games, Arcade
Android 4.4 +
Version: 1.7.17
$0
Crowd City (MOD, Unlimited Time) - dynamic action arcade with elements of tactical strategy in which you have to go to the streets of the city and try to collect as many like-minded people as possible while collecting people of your own color and avoiding clashes with opponents until a certain time. As soon as you collect an impressive army, you will have the opportunity to take part in the clash, the victory in which will depend on the balance of forces. Minimalistic graphics in no way spoil the overall picture of the game.
Additional Information from Google Play:
Updated February 10, 2021
Size 83.4Mb
Installs 100 000 000+
Rated for 3+ years