Download Into the Dead 2 (MOD, Unlimited Money) free on android 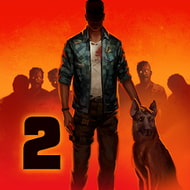 PIKPOK
Games, Action
Android 4.4 +
Version: 1.44.2
$0
Into the Dead 2 (MOD, Unlimited Money) - continuation of the popular action runner on a zombie apocalypse. The sequel retained the game mechanics of the first part while receiving updated graphics, an expanded arsenal of weapons and new types of uniforms. And so, you have to go through 7 chilling soul heads, more than 60 levels while completing hundreds of tasks. It is also worth noting that the developers have noticeably diversified the gameplay by adding different locations, as well as the ability to use different fortifications and firing points, in addition, you can use the help of a partner.
Additional Information from Google Play:
Updated February 23, 2021
Size 44.7Mb + 1366.5Mb
Installs 10 000 000+
Rated for 18+ years