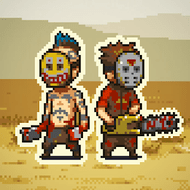 Mobirate
Games, Strategy
Android 4.1 +
Version: 3.0.5
$0
Dead Ahead: Zombie Warfare (MOD, Unlimited Coins) - pixel-style tactical zombie action. Your task is to take control of the movement of the bus in which the survivors in the zombie apocalypse are moving. You have to make a long and difficult journey during which you will constantly come across ambushes of zombies, you also need not only to save the survivors, but also to destroy as many walking dead as possible. In this case, you will have the opportunity to use both offensive and defensive tactics, not forgetting to improve vehicles. Also, for greater efficiency, units can be armed and expanded. As already mentioned, the game is visually executed in a pixel style, while at the same time having received excellent detailing of objects and locations.
Additional Information from Google Play:
Updated December 1, 2020
Size 95.7Mb
Installs 5 000 000+
Rated for 16+ years

Coins and Money increase when spent!