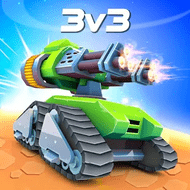 Highcore Labs LLC
Games, Action
Android 4.4 +
Version: 2.75
$0
Tanks A Lot! (MOD, Unlimited Ammo) - multiplayer action arcade game in which you will take part in exciting battles in a variety of locations. The main goal of the game is far from new, your task is to try to destroy as many opponents as possible, however, the developers have implemented an interesting opportunity to create your combat unit from scratch, while using a huge number of various modules, which will allow you to choose the best tactics and strategy, depending on the proposed location. Colorful hand-drawn graphics in Tanks A Lot mod apk perfectly harmonize with the arcade game feed.
Additional Information from Google Play:
Updated January 13, 2021
Size 136.5Mb
Installs 10 000 000+
Rated for 7+ years

Using this MOD you can be banned!