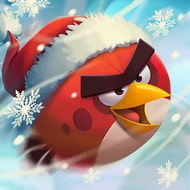 Rovio Entertainment Corporation
Games, Casual
Android 5.0 +
Version: 2.49.0
$0
Angry Birds 2 (MOD, Unlimited Money) - continuation of the cult arcade about evil birds. In general, the sequel has retained all the main features of the series, including game mechanics, familiar characters and the general atmosphere, while the second part has acquired updated graphics, new features and a huge amount of new levels. In addition, in Angry Birds 2 mod apk you will have the opportunity to test your strength in multi-stage levels, compete in the arena, participate in rating competitions and even join the clan. It is worth noting that you have the opportunity to improve and customize the birds, as well as perform daily tasks.
Additional Information from Google Play:
Updated January 15, 2021
Size 221.2Mb
Installs 100 000 000+
Rated for 3+ years

Using this MOD you can be banned!