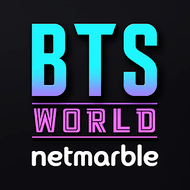 Netmarble
Games, Casual
Android 4.4 +
Version: 1.3.2
$0
BTS WORLD - an original casual simulation game in which you will play the role of a band manager, and you will have to start working from the very beginning of the band. The gameplay begins from the moment when you get a ticket to the concert, get acquainted with the team and proceed to the promotion of the group. The originality of the project lies in the fact that the entire gameplay is in cinematic style, using more than a hundred videos and 10,000 photos.
Additional Information from Google Play:
Updated November 15, 2019
Size 96.4Mb
Installs 1–5
Rated for 3+ years