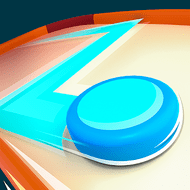 SayGames
Games, Simulations
Android 4.1 +
Version: 1.7.0
$0
Battle Disc (MOD, Unlimited Coins) - casual arcade game with elements of physics in which your task, while on the playing field, is to launch a disk in such a way as to destroy the enemy’s defenses, which consists of various blocks, however, it should be borne in mind that if your opponent can catch the shell, then your base will be attacked. And so, you will find a lot of levels and of course a system of achievements and bonuses that you can use during the game. Dynamic gameplay, minimalistic graphics and a physical model will make Battle Disc an excellent time killer.
Additional Information from Google Play:
Updated January 16, 2020
Size 37.0Mb
Installs 1–5
Rated for 3+ years