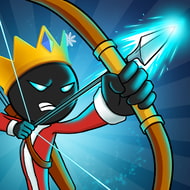 OneSoft Global PTE
Games, Arcade
Android 4.1 +
Version: 3.12
$0
Mr Bow (MOD, Unlimited Coins) - an arcade puzzle in a minimalist style and elements of physics in which you have to go through several dozen levels on each of which your task will be to destroy all enemies. In general, the gameplay is far from new, but the selected feed deserves attention. And so, each location is a heap of platforms on which there are enemies with armed bows firing at you, but you are also quite capable of repelling. At your disposal will be a wide selection of bows and arrows, with each set having unique properties that must be considered when firing. Each of the characters also has its own skills, which will also affect the gameplay.
Additional Information from Google Play:
Updated November 13, 2019
Size 38.4Mb
Installs 1–5
Rated for 3+ years