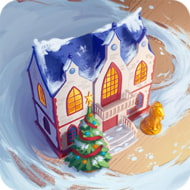 MyTona
Games, Adventure
Android 4.0.3 +
Version: 1.47.5
$0
Seekers Notes: Hidden Mystery (MOD, Unlimited Money) - adventure quest from the series searching for items in which you have to go to a mysterious city called Darkwood, each street of which is fraught with dozens of secrets, but at the same time these secrets are not disclosed to everyone. According to the storyline, you play the role of you play the role of a seeker who must solve all the secrets of the city and save the inhabitants from the mysterious curse, and a mysterious artifact should help you in this. Excellent graphics, a mystical plot, dozens of characters and about 6900 different missions, tasks and quests make this game one of the best representatives of the genre.
Additional Information from Google Play:
Updated 12.28.2019
Size 31.4Mb + 89.5Mb
Installs 10–50
Rated for 12+ years