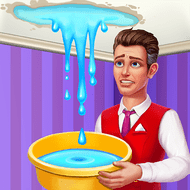 WhaleApp LTD
Games, Adventure
Android 5.0 +
Version: 1.1.54
$0
Hidden Hotel: Miami Mystery (MOD, Unlimited Money) - a colorful game with a detective story which is a combination of genres, mechanics and directions. And so, according to the authors' idea, you will play the role of a detective who arrives at an abandoned hotel in order to unravel a series of secrets and mysteries. However, once in place, you have to not only explore the hotel, find hidden objects and collect evidence, but also restore the destroyed building, which will require funds that can only be earned by adjusting the infrastructure and economy. Separately, it is worth noting that adhering to the storyline, you can switch between modes at any time. The picture is complemented by nice hand-drawn graphics and dozens of characters.
Additional Information from Google Play:
Updated November 16, 2020
Size 130.8Mb
Installs 10 000 000+
Rated for 3+ years