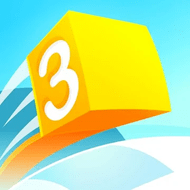 VOODOO
Games, Arcade
Android 4.4 +
Version: 1.3
$0
Paper.io 3D (MOD, Unlocked) - a series of online games which is characterized by characteristic gameplay mechanics. VOODOO developer studio known for its arcades and time killers decided to look at this direction from a new perspective. And so, your task will still be to try to get priority over rivals, but Paper.io 3D has acquired three-dimensional graphics and, unlike similar projects, battles will take place not on the battlefield, but on a canvas of paper. In other words, your task will be to try to paint the canvas with your own color while maintaining a balance of power and carefully choosing your opponents.
Additional Information from Google Play:
Updated March 5, 2020
Size 63.9Mb
Installs 10–50
Rated for 3+ years