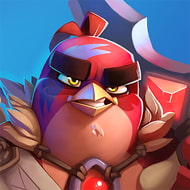 Rovio Entertainment Corporation
Games, Role Playing
Android 4.4 +
Version: 2.0.1
$0
Angry Birds Legends - continuation of the franchise about the evil feathered, but this time the creators of the series decided to move away from the arcade genre and please us with a full-fledged role-playing with turn-based battles. In general, game mechanics is designed in the best traditions of the genre, you have to assemble a squad of well-known characters under your command, and then choose a suitable opponent to fight him in one of the hundreds of available arenas. The widest system of development, improvements and bonuses will allow you to choose the best tactics, as well as create a unique squad of wars. For a greater variety, the guys from Rovio added all kinds of tasks, missions and daily events. It is worth noting that the general atmosphere is sustained in the style familiar to the series.
Additional Information from Google Play:
Updated March 27, 2020
Size 61.9Mb
Installs 1–5
Rated for 3+ years