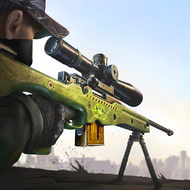 VNG GAME STUDIOS
Games, Action
Android 5.0 +
Version: 1.22.0
$0
Sniper Zombies: Offline Game (MOD, Unlimited Money) - dynamic action shooting gallery whose creators took as a basis the popular zombie theme. In general, of course, the idea of the game is not new, but this project deserves attention due to its excellent graphics, an impressive arsenal of weapons, a variety of locations and realistic physics. In addition, it is worth noting that the developers added a storyline, the ability to complete missions and tasks, which will give the gameplay interest and meaning. For greater entertainment, the creators realized they used various visual effects.
Additional Information from Google Play:
Updated October 22, 2020
Size 137.0Mb
Installs 5 000 000+
Rated for 18+ years

Money and Gold quantity can be minus, but you can spend it!