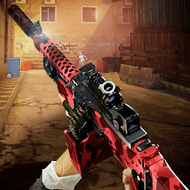 VNG GAME STUDIOS
Games, Action
Android 4.4 +
Version: 1.18.0
$0
Zombie Hunter (MOD, Unlimited Money) - classic third-person shooter whose creators released a number of games on this topic. And so, according to the authors' idea, you will play the role of one of the few survivors of the zombie era - the apocalypse. In general, of course, the idea of ​​the game, as well as the plot, is far from new, however, ZOMBIE SURVIVAL mod apk deserves attention due to the dynamics of gameplay, console-quality graphics, a rich arsenal of weapons, sophisticated controls and wide game capabilities. Separately, it is worth noting the possibility of playing offline, which will significantly increase the demand for the project.
Additional Information from Google Play:
Updated March 29, 2021
Size 132.2Mb
Installs 5 000 000+
Rated for 16+ years