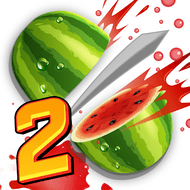 Halfbrick Studios
Games, Action
Android 5.0 +
Version: 2.1.1
$0
Fruit Ninja 2 (MOD, Unlimited Money) - the second part of one of the most popular arcades in which you need to destroy all kinds of food using cutting objects. In general, the sequel retained the original mechanics while receiving somewhat updated graphics, new weapons, an additional set of arenas and locations, but the main novelty of Fruit Ninja 2: Fun Slicing Action has become a multiplayer mode in which you can compete with other players and record your name in the global achievement table. Multiplayer battles will require you to take a more thoughtful approach and use tactics.
Additional Information from Google Play:
Updated November 23, 2020
Size 187.2Mb
Installs 1 000 000+
Rated for 3+ years