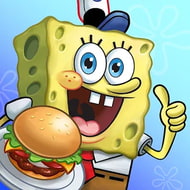 Tilting Point
Games, Casual
Android 5.1 +
Version: 1.0.27
$0
SpongeBob: Krusty Cook-Off (MOD, Unlimited Money) - a new casual arcade on culinary themes whose creators decided to take as a basis the popular animated series SpongeBob SquarePants. According to the authors' idea, Mr. Krabs decided to open a network of fast food restaurants and, of course, invited all his friends to help. In general, the game mechanics are made in the usual style for the genre, prepare food, serve visitors, develop a network of eateries, complete tasks and communicate with the characters, while the creators managed to maintain the original atmosphere and graphic, which will undoubtedly delight fans of the series.
Additional Information from Google Play:
Updated January 13, 2021
Size 122.7Mb
Installs 10 000 000+
Rated for 3+ years