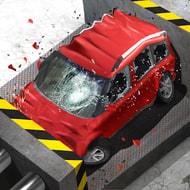 BoomBit Games
Games, Casual
Android 5.0 +
Version: 1.3.5
$0
Car Crusher (MOD, Unlimited Coins) - an arcade time-killer with elements of physics whose developers used a rather unusual idea as a game mechanic. And so, you have to control a hydraulic press to destroy various vehicles from cars to airplanes. Perhaps, at first glance, the gameplay may seem monotonous, but realistic physics, detailed graphics and a well-developed damage model will give the process of realism and originality. In addition, you will be able to examine in detail the process of destruction and set up a kind of experiment.
Additional Information from Google Play:
Updated August 30, 2020
Size 77.6Mb
Installs 5 000 000+
Rated for 3+ years