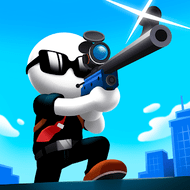 SayGames
Games, Action
Android 4.4 +
Version: 1.0.12
$0
Johnny Trigger - Sniper Game (MOD, Unlimited Money) - cartoon action shooting game with a criminal plot in which the main character was a popular digital character Stickman. And so, choosing a rifle and climbing on the roof you have to shoot the bandits. An interesting gameplay feature is the ability to own the soundtrack. Different locations noticeably diversify the gameplay and give the mechanics of originality.
Additional Information from Google Play:
Updated January 8, 2021
Size 78.0Mb
Installs 10 000 000+
Rated for 12+ years