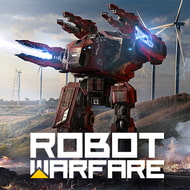 Azur Interactive Games Limited
Games, Action
Android 5.0 +
Version: 0.2.2310.1
$0
Robot Warfare: Mech Battle 3D (MOD, Unlimited Ammo) - multiplayer online shooter in which you have to sit down for the control levers of the combat robot, and in addition to the choice of different types of furs you can change all kinds of settings, weapons and equipment. Well-designed models, three-dimensional graphics and realistic animation will allow you to immerse yourself in the atmosphere of the game. Gaming mechanics will appeal to all fans of classic online action, and the presence of familiar game modes only has a positive effect on gameplay.
Additional Information from Google Play:
Updated August 10, 2020
Size 38.8Mb + 391.2Mb
Installs 5 000 000+
Rated for 12+ years