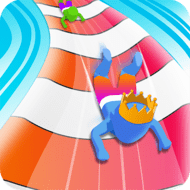 VOODOO
Games, Action
Android 4.4 +
Version: 4.3.1
$0
aquapark.io (MOD, Unlimited Coins) - an action-packed multiplayer arcade in which you'll have to go through intricate tracks in the water park while descending the waterslide you'll have to fight real players for leadership positions. Perhaps in itself the idea of the game is not new, but the implementation of mature in the style of an amusement park that involves colorful locations, bright colors, gameplay dynamics and the ability to compete with real players will noticeably diversify the gameplay. Of course, as in any online game in aquapark.io mod apk integrated system of leaders and ratings.
Additional Information from Google Play:
Updated April 6, 2021
Size 84.0Mb
Installs 100 000 000+
Rated for 3+ years