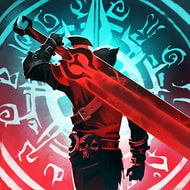 Fansipan Limited
Games, Action
Android 5.0 +
Version: 1.1.411
$0
Shadow Knight (MOD, Immortality) - atmospheric action with elements of platforming, fighting game and slasher. Stylized for the storyline graphics and animation gives gameplay a mood of chaos and despair, which is quite consistent with the general idea. It should be noted that this project, unlike many analogues, got a rather intricate plot, which in combination with dynamic gameplay will give Shadow Knight mod apk originality and uniqueness. In order to be fully imbued with the events, the creators of the project implemented a wide range of missions and tasks.
Additional Information from Google Play:
Updated December 18, 2020
Size 147.1Mb
Installs 1 000 000+
Rated for 12+ years