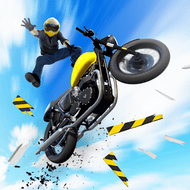 BoomBit Games
Games, Arcade
Android 5.0 +
Version: 1.3.1
$0
Bike Jump (MOD, Unlimited Coins) - a rather popular sport, the main task of which is to overcome the intricate routes, both man-made and natural, while performing jumps, stunts and culbits. Bike Jump is an arcade cross country simulator, but its creators have made the gameplay a little bit easier and in the end you just have to make spectacular jumps. With a wide range of two-wheeled equipment, an impressive arsenal of tricks, and plenty of locations and ski jumps, you'll be able to reach your full potential.
Additional Information from Google Play:
Updated April 15, 2021
Size 86.2Mb
Installs 10 000 000+
Rated for 3+ years